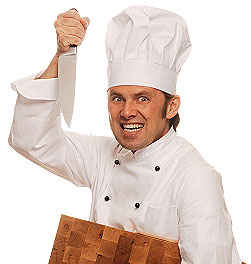 You can't swing a dead vole around lately without hitting a reality series on television.  Being a guy who writes things, I can't help but be resistant to this trend.  I know they're cheaper to produce than scripted entertainment, but are they really more satisfying?  Think back (if you can) to the last series that really made you laugh and I'll bet someone wrote it.  If someone didn't, and you're still laughing, chances are you're laughing at someone and not with them.  There are plenty of poor bastards on reality T.V. too to chuckle at.  After all they're just slobs like us with cameras stuck in their faces trying desperately not to look like a complete dork in front of 30 million people.

This is not to say reality T.V. isn't entertaining or even educational in its own right.  It can be, provided you're watching the right stuff and paying attention.

For example, I've learned a lot from the reality shows I end up watching at 11pm on a Thursday night when nothing else even remotely interesting is on.  Like this:

1. When you're heading into a storm, make sure to deploy all your crab pots so they're not sitting on your deck.

Sure this sounds obvious, but you'd be surprised how many people don't get this and end up crashing on a rocky shore somewhere in The Deadliest Catch.

Again, you may say, "But, Scott, that's totally obvious.  I didn't need to watch Hell's Kitchen or Kitchen Nightmares to figure that out, I met him once and he screamed at me for twelve minutes about the color of my tie and I was wearing a T-shirt!"  Point taken, but don't kill the messenger here.

3. When you're asking people for lots of money, try to figure out what you're going to spend it on before asking for it.

I'm a big fan of the BBC's Dragon's Den, and although this sounds completely obvious, you'd be very surprised how often people don't seem to get this one and how totally entertaining it is to watch when they don't get it.

4. Learn how to properly attach chains to your tires before venturing onto Alaska's ice road.

You'd think you'd want to bone-up on arctic-circle travel tips before venuring up north from Minnesota to appear on Ice Road Truckers, but this doesn't occur to everyone.

5. Sharks will eat absolutely anything, including you.

Doesn't anyone remember Jaws anymore?  Honestly, I think a five minute spot would do the trick here, do we really need 178 shows reiterating this basic principle?

You're on tape, buddy, there's no hiding sneaking in some fresh herbs. If you're going through all the trouble to prove that you are, in fact, a Top Chef you better be ready to make a five-star creation from that lumpy old ham sandwich, Fritos and sprite.

Why else would you bother inviting him to your kitchen nightmare for pointers if he wasn't?  You really gotta wonder what that David guy from The Black Pearl or Sebastian from Sebastian's was thinking when they contacted Fox in the first place.