Pitching History, One Show At A Time 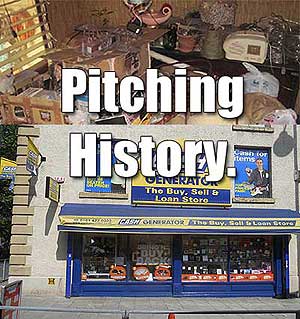 "Thanks for taking this meeting, I really appreciate it, Mr. Jones. You don't mind the extra-wide lapels and bell-bottoms, do you?"

"How could I, it's 1977 and I'm a high-powered television executive, after all.  Cigarette?"

"Sure, I just ate, could use some help digesting."

"So Mr. Lipstein, your agent said something about a pitch you had for our new network 'The History Channel.'"

"Not one, Mr. Jones, but several great ideas.  When we read in Variety you were launching a new network, I gotta say, the boys and I were so excited we drank scotch the rest of the afternoon and smoked at least a carton of cigarettes until we involuntarily pissed our pants."

"Picture this: Las Vegas.  The city that never sleeps.  High stakes gambling, hookers, the rich and powerful sitting right next to the farmer from Topeka, each able to strike it rich or go bust with the drop of a few cards."

"I like it, I like it.  So this is a gambling show, the history of Vegas casinos or something like that?  Can the Rat Pack do a cameo?"

"Not exactly.  See, the whole thing takes place at a pawn shop on the outskirts.  The grouchy owners and a couple of the simple clerks."

"I... I don't think I'm following you here.  You mean the whole thing is just filming how a pawn shop works?"

"And all the drama and excitement that goes on!"

"Well really OLD buckle.  You need to see the whole..."

"And just what the hell does that have to do with history?  Following the mundane operations of a pawn business?  Jesus, how bored would people have to be to watch that, might as well film a laundromat!"

"Ok, ok, like I said that's not all we got here.  So picture this: Alaska.  The final frontier, real old west type vibe.  Uncharted territory, danger, excitement, tons of vicious, blood-thirsty bears everywhere."

"Mmmmm. Ok ok, I like that.  Sort of a 'new wild west' thing.  The history of the biggest state, checkered history, big personalities.  I like it."

"Sure there's that; keep that in mind as subtext.  We call it 'Ice Road Truckers,' think of it in big, HUGE lights.  All the drama of life and death situations in every show!  It's gonna be a winner!"

"How is that dramatic?"

"Will it?  I mean are we gonna at least see people in real danger?"

"Well...no.  For legal reasons, we couldn't really show that, but I think you're losing the big picture here...."

"Look, I've got another meeting in five minutes, so I think you should keep your next appointment."

"This last one, I know you're gonna love.  Bill, I happen to know for a fact that your wife loves antiquing."

"Then get ready for 'American Pickers'!!  You could build your entire prime-time lineup around this puppy!  And repeat the hell out of it over weekends and holidays!!"

"Pickers.  You know, a couple Laurel and Hardy types driving around rural America looking for... looking for, well, old stuff.  To buy."

"Lipstein, I must say, I'm flummoxed here.  We're trying to build a serious channel devoted to historical examination, seeing the rich history of the world from many different perspectives, even crossing the lines of traditional scholarship, and you pitch me a show about a pawn shop, truck drivers, and junk collectors bothering hoarders?"