WASHINGTON - An attacking wookiee was put down by the President's secret service detail today during a photo-op gone awry. 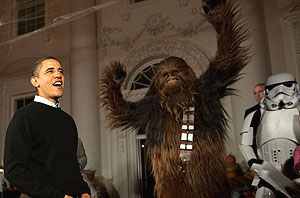 The wookiee, whose name is unpronounceable to humans, was invited to the White House as part of a minority recognition program started by the Obama Administration late last year.  Also in attendance was a Death Star Stormtrooper, representing the Bush Administration.

"At approximately 10:15 hours the wookiee showed signs of extreme aggression," said Special Agent Bill Johnson, head of the President's Secret Service detail.  "Agents immediately took action and put down the beast before he had a chance to harm the President or anyone else, firing a total of 95 rounds.  The President was immediately removed from the area, along with his family, and the area secured."

"We train for scenarios like this all the time," Special Agent Johnson explained.  "You never know when your training will be needed, but at times like these, when a gigantic alien creature is about to maul your President to death, you react purely on instinct."

President Obama expressed his condolences to the wookiee's tribe later in a statement to the press.  "We regret what happened earlier today, and recognize that intra-species interactions may sometimes be misinterpreted.  We hope that the wookiee's tribe understands the actions of the Secret Service today, and join with us to ensure that incidents like this don't happen again in the future."

Howling incomprehensibly at a press conference of their own, a spokeswookiee, we believe, expressed grief over the events, but assured humans that they are still generally okay with us as a species.  Howling further, we think the wookiee went on to say they remain reliable side-kicks to spacefaring human pilots, despite a penchant for brutally dismembering some from time to time.

Wall Street reacted negatively to the attack, punishing stocks known to be held by major wookiee investors.  Bank of America, McDonald's, and S.C. Johnson all fell hard on the news, leaving human investors ducking for cover.