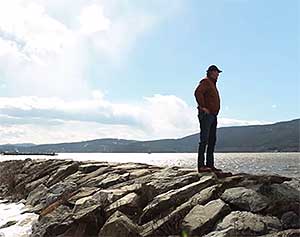 SOFTTOUCH, N.H.- Today former New York Governor George Pataki announced that he too would run for president in 2016, citing his qualifications as his ability to dress himself (with his wife's help), his fondness for staring out hotel windows as well as looking at water, and his strong like of dogs and dog-related things.

Pataki went on to demonstrate his ability to longingly stare out of skyscrapers, with a wistful, faraway and visionary look, as well as stand in the middle of a stream and stare at the water, as if searching for some ideal of natural perfection that ends up electing him president.

"I also tie my own shoes, just like I'm sure most of you do too," Pataki told the camera.  "I put my tie on, with my wife's help, who sometimes adjusts it for straightness, which I endearingly fail to do on a regular basis because I am far too distracted by more important matters to dress myself properly.  Oh and I really, really like dogs.  I have two dogs.  Don't cut that part out."

Before the end of the video, the moderate Pataki took time out to clarify that he "absolutely was NOT" George Takei, nor "related to him in any manner, despite the similarity of our last names according to goddamn Google!"