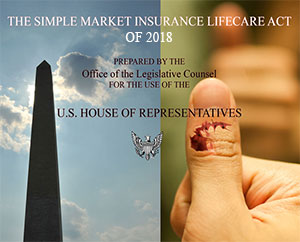 At the end, you receive a bill for services, which you then pay to the hospital, doctor, or other specialist.  The bill goes directly to you, no middlemen, no one else involved in your business.

Under Trumpcare, an Office of Administrative Oversight (OAO) will be set up, funded at an annual cost of $10 million, to help hospitals, doctors, and other health care facilities transition to the new program.  This consists mainly of making sure healthcare providers have adequate patient billing and collection software, and can refer patients to appropriate bankruptcy resources as part of a streamlined collection process.

The OAO funding is, in fact, the sole appropriation of the entire bill.

“There are no id cards, nothing you need to show to any healthcare provider or anything,” described Rep. Jack Spenser (R-Kansas), one of the bill's architects.  “No potential for privacy breeches, no socialized medicine concerns, no nothing.  It’s the least invasive legislation I’ve ever been party to in all my years in Congress.”

The act is expected to pass quickly on party line votes, and go to the President for signature by early next month.