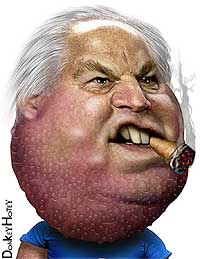 Since it’s okay for Rush Limbaugh to resort to name-calling and over the air identify a young woman who testified before Congress in favor of contraceptive coverage as a “slut,” it’s okay for me to use this space to call Limbaugh a “pig.”

No wait! I’m not gonna do that, sink to his level. I will use the more dignified word “porker.”

The porker has made a career out of sitting before a microphone and issuing invective, venom and charges of disloyalty, dishonesty, slander, name calling, all in the name of bogus patriotism----in other words-----an angry conservative oink!

Let’s get something straight right now. I’m not against the porker’s right to broadcast, because he’s essentially an entertainer who insults much like Don Rickles used to before he mellowed. There maybe is even a kernel of truth once in awhile in some of what Limbaugh says. What’s perhaps unfortunate is that so many people take him seriously, because, other than moving his lips and puffing forth inanities and insanities and un-sanitized vulgarities, what has he done—other than add gross layers of fat to his always swollen protuberances?

The porker talks about patriotism and accuses everybody he doesn’t like of being a traitor. But the jelly-roll never served in the military. Like most conservatives, he’s never served his country one day, but worked tirelessly advancing himself and his ponderous bulk---number one!

It is a statistical fact that political conservatives avoid military service like it was the plague at a rate over the liberals they despise at a ratio of two-to-one. Limbaugh the porker avoided the Vietnam War because he had a high draft number and after he virtually flunked out of school because as his mother stated, “he wasn’t interested in anything except radio.”

I doubt the military, which depends on a system of standardization, could have designed a uniform big enough for Limbaugh anyway, even though the German army made one large enough for Herman Goering. Nevertheless, the porker often verbally wraps himself in the flag, and given the size of his girth, we’re talking a serious big flag here---this is a banner formerly displayed on the side of a building.

Like all the other FOX News to-the-right-of-Genghis-Kahn invective spinners, Limbaugh got his start sitting, the same position where he remains today, originally playing records as a disc jockey. He wormed his way onto talk radio in the early 1980s when the Fairness Doctrine, an on-the-air requirement that you have to allow and respect opposing viewpoints when you lie through your teeth, was repealed.

The rest is history. While eating rich calorie-laden foods and swelling rapidly, Limbaugh tapped into the rich market audience of angry, Caucasian, young male rural Southern gas station attendants who felt threatened by the Civil Rights Movement, women’s rights and other groups demanding equality. This angry group of fans, some of them overweight like Limbaugh, wanted a return to the old days where people of color and women knew their place, thus the porker’s “slut” remark. He feels himself elementally qualified to tell young women what they should do with their bodies.

This is kind of ironic in that Limbaugh can’t seem to control his own State-of-Texas-sized body. Part of this can be attributed to the fact that he gets very little physical activity except switching on the microphone and that region around the mouth.

At first, when the porker says something stupid, you take it serious and want to respond, like I am doing here. In the past, his vast array of mis-pronouncements has been as incredible as they are entertaining. But he manages always to tweak that pathologic feeling of bitterness among young white boys that this country is no longer theirs.

The litany is too vast to recite here, but it includes blaming the Sierra Club for the oil spill in the Gulf of Mexico, castigating people who exercise for putting a strain on the health care system (Limbaugh thinks inactivity is healthy), calling Obama’s wife fat (the pot calling the kettle black), that women rally admire male chauvinist pigs (Limbaugh’s pig remark is unintentionally honest despite himself), and that Obama is a head hunter with a bone in his nose who used to cook missionaries in a stew pot in Kenya.

In other words, up is down, square is round, black is white.

He starts his day with a calorie-laden egg sandwich dripping with rich butter laced with sugar and maple syrup poured over all. This prepares his muscle-bound mouth for the day’s worth of poison airtime to come. He chuckles a lot to himself about how clever his is, but most importantly, how successful and important he is. If he wasn’t important, why would half the country listen to him at all?

Pretty good for a fat little nondescript man with a talent for the snide.