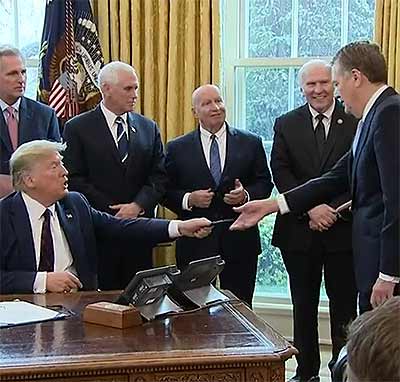 NEW YORK – Today stocks soared as Washington decided to dump $850 billion into stabilizing the economy, and perhaps even distribute checks for a few hundred dollars to taxpayers, who funded the bailout.

Brad Worthington III, Chief Investment Officer at Phineas-Finch-Marlowe Investments called the move “awesome.”  “Finally the politicians are waking up to how to avert another 1929 here,” said Worthington.  “Without immediate stimulus, I don’t think we could make it another week.” 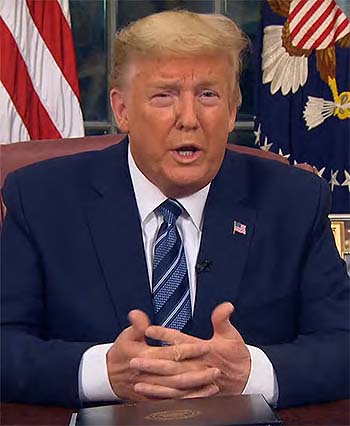 "We've faced stuff like this before, and worse, much worse, as a nation, and even this, when it gets much worse than it already is now, and this is how things go with epidemics, this is always the way these things happen," Trump explained.  "Do people die?  Sure, some do, but not everyone dies, it's just not how these things happen.  For example, I feel fine, really good.  I have a real knack for this, trust me, it's like an intuition," he continued, while several senior advisors shouted off-camera: "GOOD GOD STOP! NO NO NO!! CAN'T SOMEONE SHUT OFF THESE CAMERAS!!!"

One of those advisors, Dr. Andre Hollender, Deputy Chief Medical Officer at the Centers for Disease Control and Prevention, at this point fainted.

"I'm feeling really, really good," Trump continued, apparently oblivious to his advisors, including a stoic Vice-President Pence, who remained motionless throughout.  "I mean good.  My doctors just look at me and say, 'You're great, Mr. President.  No need to waste one of those tests on you.  I mean we don't have any tests anyway, but you don't even need it.'"

At this point in tears, the Vice-President was escorted from the Oval Office by his Secret Service detail.

Nearby, a triple-scotch in hand, Senior Economics Advisor Gerry Felder, raised his glass to the exiting V.P.  "Woo-hoo!  Game on!" he noted as the V.P. left.

"Seriously, I woke up last night a little cold, so I turned up the thermostat a little bit, but besides that I've been tip-top," Trump said. "So there's seriously nothing to worry about.   So carry on, and whatever you do, keep believing in the U.S. economy, because it's really, really, really fantastic."

Trading halted overseas as markets spiraled into freefall, losing hundreds of billions in shareholder value throughout the President's speech.  Monitoring the sharp declines from his phone, Senior Economics Advisor Gerry Felder downed the rest of his scotch and broke out laughing, then crying, then laughing again.

We caught Wall Street today before it entered the Stock Exchange, looking surprisingly well rested but hung-over.  When asked if today was going to be another bloodbath, the Street smiled wryly.  "Are you kidding?  I've been shorting the market since last week, I'm up double-digits.  This guy [Trump] is a trader's wet-dream."