CHICAGO - To nobody's surprise, today the scientists behind the symbolic 'doomsday clock' - a representation of how close humanity is to annihilation - moved up 30 seconds to a mere two and a half minutes until "midnight" (extinction). 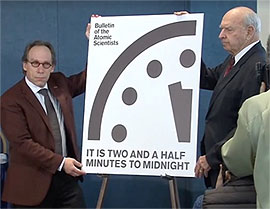 "We are troubled by many factors," said Dr. Laura Swift, one of the scientists behind the decision.  "Both Russia and the United States control 90% of the nuclear weapons in the world and are engaged in several contested areas on the globe, including Syria.  In addition, climate change continues to threaten humanity, and little has been done to slow or even stop what are soon to become irreversible global forces that could wipe out billions of human beings in the process.  Third, well you guys elected a reality T.V. host who doesn't believe in science and loves nukes to be president." Pausing, and shaking her head, Dr. Swift continued, adding, "Boneheads."

The clock, which was established in 1947 by University of Chicago scientists, some of whom had participated in the Manhattan Project, was adjusted to 3 minutes before midnight in 2015, but began at 7 minutes (11:53) back in 1947.

Wall Street ignored the scientist's move, instead preferring to bask in the very real prospect of huuuuge tax breaks in the 2017 fiscal year.  Taking a light trading day, the Street knocked off for the day just after a four martini lunch at that new place in The Beekman Hotel, Colicchio's joint Fowler & Wells.

Senate Does Nothing Today

WASHINGTON – Things were quiet today in the U.S. Senate as no legislative business was scheduled, leaving C-SPAN to play quiet, classical music and staffers to wander around gossiping and drinking coffee. Most fell into one or more hours of Candy Crush.

“Nope nothing to report,” said Senior Legislative Analyst Sean Young, who I bumped into wandering around the chamber. “Nothing on the docket, nothing discussed, no debate, no actual senators showed up or did anything.” Idly tossing his yo-yo toward the floor and pulling it back up, Young continued, “Nope, can’t even find anything mildly interesting on the [congressional] twitter feeds.”

Wall Street reacted in no way to the senate’s lack of activity, instead occupying itself with three hours of Pokémon Go around Manhattan, before stopping for lunch at Yves on Greenwich Street.

TOKYO - A draft of a government report today suggested that it would be possible for the aging Emperor Akihito to "abdicate" his throne and retire, something which has not happened in 200 years in Japan. 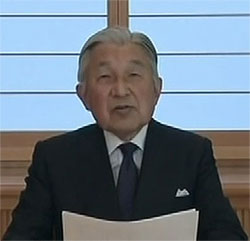 The aging Akihito, son of Hirohito, has been emperor since 1989 following his father.  Now in his eighties, the aging ruler desperately asked to "please be allowed to rest" in a recent televised address.  "I am very old now, and just want to retire," Akihito said, pleading.  "This is really a ceremonial position anyway, but the scrutiny is incredible.  I do not want to be filmed falling down or drooling or some such.  Please, please let me rest, I'm tired and desire soup."

Debate in the National Diet was, as usual, low-key.  Liberal Democratic leader Hidehisa Otsuji was overheard whispering to other leaders that "this would be a terrible precedent," while others bowed and whispered back, "he is old, and just wants soup, let the man be."

The Japanese public, meanwhile, has been generally sympathetic.  "The Emperor is a great man and beloved by everyone," said typical Japanese businesswoman Mura Hikito, whom we stopped on the street in Tokyo.  "He is also an older man who wants to enjoy retirement and simply enjoy his soup.  I say he is entitled."

"Yes, why not," agreed businessman Hiro Mikomoti, bowing profusely and handing me his business card.  "He desires soup and is substantially aged.  I would want the same at his age."

The Tokyo Stock Exchanged opened mixed this morning, following the Emperor's address last night, with soup and food retailers rising but high-tech issues taking a severe beating.  By the late morning, the tide had reversed as profit-taking smacked around soup issues, leaving high-tech conglomerates to take a victory lap after a strong rebound.